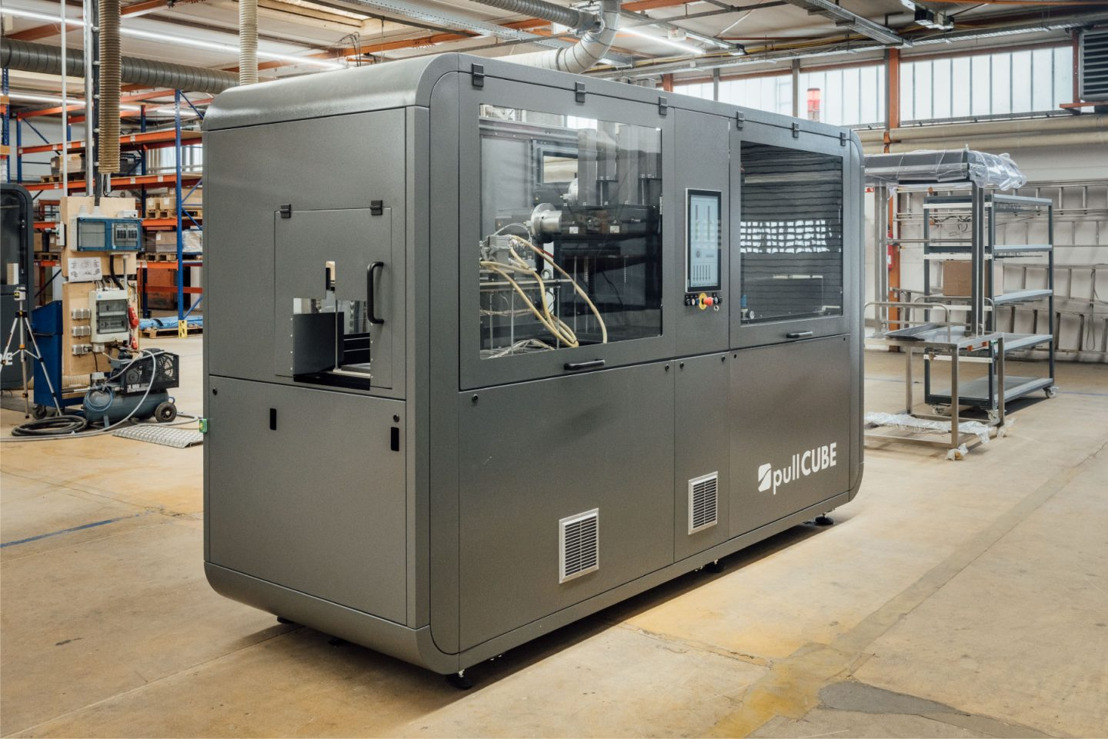 In 1981 even Udo Lindenberg sang the song “Sandmännchen” from the “Schlafbehörde” in Bremervörde. This meant Thomas GmbH + Co. Technik + Innovation KG (TTI): The North German family-run company made its international breakthrough in 1956 with the invention of the slatted frame, leading it to prominence in pop culture. The approach to rock music fits in with TTI: “Rebellion against the status quo is part of the family’s blood, and from this comes a drive for innovation”, says Managing Director Boris Thomas, who is now running the company in the third generation. At the end of the 1990s, TTI opened its own mechanical engineering division specialising in pultrusion, an automatic process for producing fibre-reinforced plastic profiles. In this process, dry fiber reinforcements are drawn through a resin bath and cured with the aid of heat before being cut to size as a finished profile. In this way, the company aims to become independent of suppliers when it comes to profiles for its laying systems and to ensure higher quality. Today, TTI is using the pullCUBE to build the world’s shortest pultrusion machine. Companies all over the world are interested in the innovative machine, so TTI is building it in series. This has consequences for the subcontractors: “We don’t see ourselves as a factory, but rather want to offer the consistent level of quality and robustness of series production”, emphasises Boris Thomas. TTI therefore purchases the cables and connectors for the pullCUBE ready assembled in the cable chain from the global market leader for integrated connection technology, LAPP.

From slatted frame to mechanical engineering – and always rebellious

TTI, that is now a modern production plant with several parts of the building, has its headquarter in the middle of rural Bremervörde, between woods and residential buildings. The workshop of furniture carpenter Karl Thomas, founder of the family company, stood here back in 1935. At the time of the Second World War, he joined the socialist youth workers, was imprisoned for this and the workshop was closed for a long time. “My grandfather was a rebel, and this has consistently affected the entire family since then”, says Boris Thomas smiling. In the post-war years, the Thomas family and their employees channelled their urge for rebellion into technological innovation. In 1956, the company invented the slatted frame, known as “Lattoflex”. At the end of the 1990s, TTI continued to improve this concept and developed the wing spring – an even more ergonomic laying system made of glass fibres and plastic instead of wood. However, the supplied glass fibre profiles prove not to be robust enough. Customers complain about broken bars – the birthplace of mechanical engineering at TTI, which now builds pultrusion machines to produce its own glass fibre profiles and sell them to third parties. 2008 is the year of TTI’s next revolution: for the first time, the patented radius pultrusion process can be used to produce bent glass fibre profiles. A moving mould instead of the usual rigid mould makes this possible. As components made of glass fibres and composites are playing an increasingly important role in many industries, there is a great deal of interest. For example, the American sports car icon Chevrolet Corvette in the eighth generation carries a curved front bumper created at TTI. In 2020, TTI finally presents its latest innovation: the pullCUBE combines all the company’s pultrusion know-how in one compact machine – the shortest of its kind.

The shortest pultrusion machine in the world is flexible, safe, and efficient

A pullCUBE, which was just built for a customer at TTI, stands in the middle of the factory hall: With its rounded corners, the full cladding in the bottom and the glass windows in the upper half, the machine looks like a design item. The shortest pultrusion machine in the world also offers practical advantages for users. The pullCUBE, which is just 3.5 metres long, including the mould, the gripping unit and an accompanying disc saw, can be transported very easily – all that is required is a forklift to load and unload the transport vehicle. And as everything is installed in one housing, there is no need for on-site assembly. The completely enclosed system is also a safe system that is unique in the world, as operators of the system cannot reach the grips, saw or hot surface of the mould with their hands. The compact dimensions also make it easier to position the machine exactly where it is needed, instead of having to look for where there is enough space for a conventional pultrusion line, which is at least 15 metres long. The pullCUBE is not only more compact but also more efficient than conventional systems, as it does not require a cleaning cycle. This means nothing is wasted on the profile, which enables users to save up to €144,000 per year with 200 days of production. In addition to these practical advantages, the design and user experience also played a major role in the development: “We focused a bit on the iPhone when designing the pullCUBE”, explains Isabell Ruröde, Operations Manager at TTI. “This includes the shape of the housing, but also the touch control panel with intuitive user guidance. This makes operation easy for all users, from beginners to professionals. And the device is very smart in the production environment. It looks just as valuable as it is”.

Because TTI also builds the pullCUBE for other companies and therefore has particularly high demands on the quality and reliability of the machine, choosing the right partners was an important factor for the company: “At TTI, we see ourselves as a solution provider. Our customers do not just get a machine from us, but also our pultrusion expertise in the form of advice and support for their entire process. This is something we are looking for in our suppliers”. With LAPP, the right partner was found for connection solutions such as cables and connectors for the pullCUBE. TTI sources ÖLFLEX® cables, EPIC® connector components, SKINTOP® cable glands, SILVYN® cable protection and supply systems, as well as FLEXIMARK® marking systems from the Stuttgart-based company. LAPP supplies the components ready for installation to the assembly group for the movement axes of the saw, saw trolley and tool trolley on the pullCUBE. LAPP has been offering cable and cable chain assemblies as a service for many years, with a product range ranging from customised cable assemblies and servo assemblies according to common standards to fully assembled cable chains with electrical, pneumatic, hydraulic and steel construction.

LAPP experts analyse the customer’s requirements, develop proposals for optimising the connection solutions, create concept drawings and compile material lists. Based on this, LAPP arranges cable assemblies according to requirements. All the customer has to do is mount them in the intended location and plug them in. Thanks to quality control at LAPP, flawless operation is guaranteed immediately. Sebastian Achatz, Business Development Manager ÖLFLEX® Connect at LAPP, is delighted with the highly professional collaboration with TTI: “From the very beginning, TTI wanted to have a single-source supplier of cable chains for the pullCUBE. With our broad portfolio and our modern plants, we at LAPP can deliver ready-to-install cable chain assemblies of consistently high quality on request. All individual components are precisely coordinated with one another. This reduces assembly and process costs and enables TTI to concentrate entirely on its core competence – the development and assembly of pultrusion machines.“

This simplifies the production of the pullCUBE and ensures consistent quality, but Boris Thomas experiences also further advantages of working with LAPP: “We are always looking for long-term partners that we know and who know us, who will help us to develop and further develop our products and who are technologically at least on par with us. This was precisely the decisive factor in our decision to work with LAPP”. Peter Engwer, Project Manager Applications & Cable Chains at LAPP, managed the project with TTI in the in-house technical department, selected the individual components, defined the material parts list, and created the production drawing. He is delighted with the joint success: “The pullCUBE is a fantastic machine that is really making international waves. With our assembled connection solutions, we are doing our part to ensure that TTI can offer its customers the desired quality”. Boris Thomas is also very satisfied with the collaboration and the connection solutions supplied: “This gives us the confidence that we have the ideal technology, we are benefiting from LAPP’s expertise in our development, and when you set up the machine, the cabling simply looks really good and professional – which is also a factor of our design requirements”.