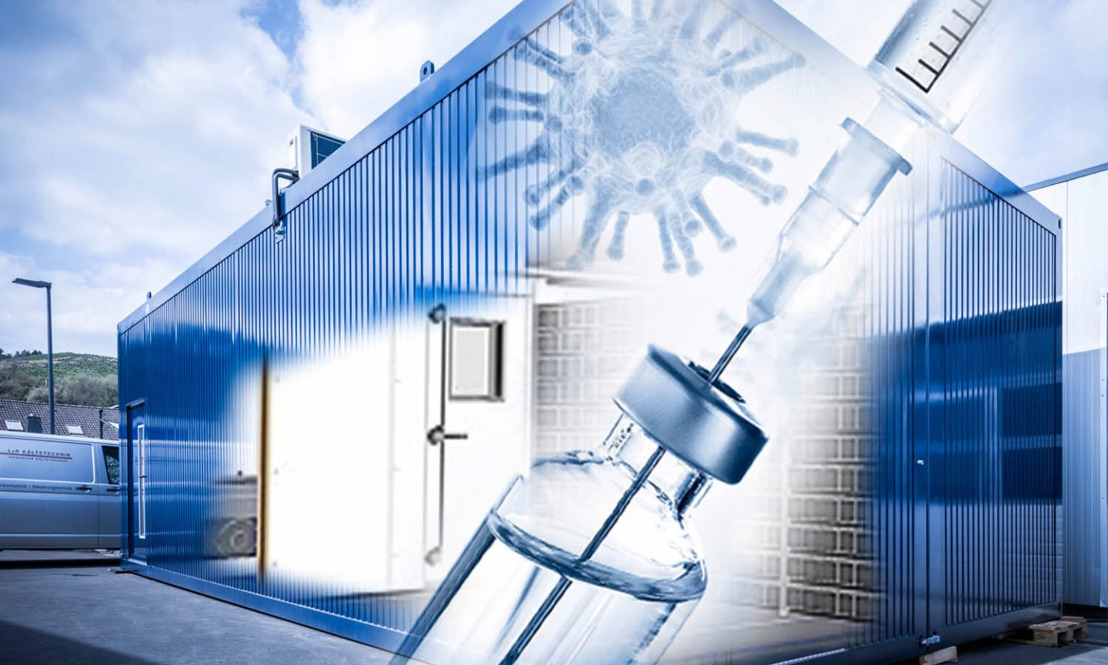 In December, the vaccinations began with Biontech’s Covid-19 vaccine. Hopes were somewhat dampened by the news that the vaccine has to be stored at -70 degrees Celsius and is only allowed to be stored in a normal refrigerator shortly before vaccination. Biontech supplies the vaccine in boxes that act like large Thermos flasks, keeping the content cool for several days. But what can logistics companies do if they want to send the vaccine in containers by air or ship, where transportation takes longer? “As soon as the problem became known, we set about finding a mobile autonomous solution”, says Christoph Wiemer, head of special systems sales at L&R Kältetechnik. The Sauerland company, based in Sundern and with 150 employees, builds refrigerating systems including machine cooling with cold water and special systems for exceptionally low temperatures for the chemical and pharmaceutical industries.

L&R came up with the idea of taking a conventional shipping container with a length of 20 or 40 feet and building in a refrigeration chamber, including cooling and even an autonomous emergency power supply with a diesel generator or liquid nitrogen – and ensuring everything has a backup in case of failure. A standard 40 foot long container can hold a 40 cubic metre refrigeration chamber with a temperature of minus 80 °C and a preliminary chamber at minus 20 °C, which acts as a low temperature airlock. The storage area is estimated to have a capacity for up to 3.5 million vaccine doses. Depending on the size and equipment, a container can cost between 150,000 and 300,000 euros. This price is lower than it seems. For such low temperatures, transport companies normally have to use dozens of laboratory deep-freeze cabinets, which are not only expensive but require significantly more power and space. According to Wiemer, the announcement made big waves, particularly in Russia and Japan. “Our management anticipates that we will sell up to 70 containers in 2021. We already have lots of enquiries.”

For 20 years, L&R Kältetechnik has exclusively been using LAPP cables. “Service, delivery time, prices – everything fits and we are very satisfied”, says Wiemer. And of course the quality. The cables have to withstand a great deal in the cold containers, as they are exposed to extreme temperatures, both cold and hot. For example, the refrigerant flows through the evaporator at a temperature of minus 90 °C. Fans ensure that the heat is dissipated. To prevent their electric motors from freezing, the bearings are heated. The two compressors have a power of 20 kilowatts each, and currents of 40 amps flow through the ÖLFLEX® Classic 110. Directly on the diesel generator, the temperature can rise to over 100 °C – positive that is. In the icy storage compartment where it can be as cold as minus 100 °C in some places, ÖLFLEX® HEAT cables with a PTFE sheath are installed.

In addition to the power cables in the cooling system, the container also contains signal transmission cables, for example from the temperature sensor that controls the frequency converter and thus the compressor. In addition, the operator can connect a data cable to the control cabinet at a customer interface. There are also some cables that are not responsible for cooling, but for heating. In the vaccine store, the LED bulbs have to be heated because otherwise they could break. And the rubber seal on the door between the lock and the storage chamber would freeze immediately, leaving any person inside trapped and quickly in mortal danger. As a result, there is heating on the door frame and door contacts monitor when someone enters the chamber. The person present in the low temperature section of the container has to press a button regularly. If there is no signal, the person may have fallen unconscious and an alarm is triggered. Any fault in the electrics could cost lives, which is why L&R Kältetechnik is playing it safe with cables from LAPP. “In our quotations we not only specify the properties of the cables but also that they are ÖLFLEX® cables from LAPP and which type”, stresses Christoph Wiemer. “That really makes a difference for our customers.”

Video: © L&R Kältetechnik: Cool solution for the world made in Germany